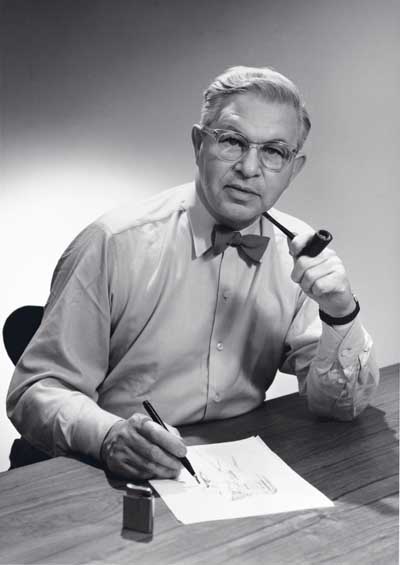 Arne Jacobsen. 1902-71
Arne Jacobsen is the Danish architect who master the most personal and successful interpretation of the international functionalism. His architecture includes a considerable number of epochmaking buildings in both Denmark, Germany and Great Britain. Arne Jacobsen initially trained as a mason before studying architecture at the Royal Danish Academy of Arts, Copenhagen, graduating in 1927.

From 1927 until 1930, he worked in the architectural office of Paul Holsoe. In 1930, he established his own design office, which he headed until his death in 1971, and worked independently as an architect, interior, furniture, textile and ceramics designer. He was proffessor of Architecture at the Royal Academy of Arts, Copenhagen, from 1956 onwards. His best known projects are St. Catherine´s College, Oxford, and the SAS Hotel, Copenhagen. 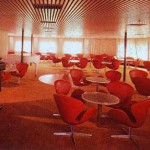 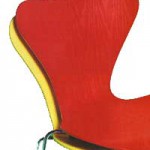 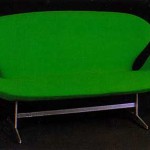 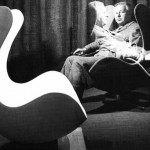 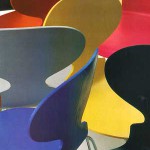 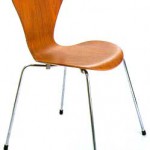 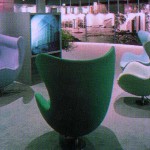 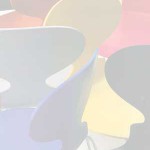 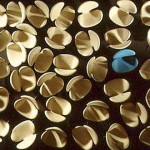 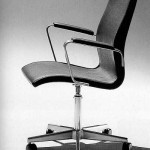 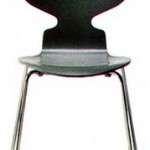 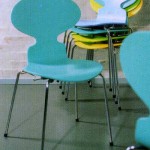 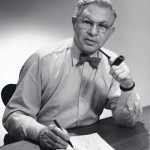 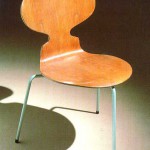 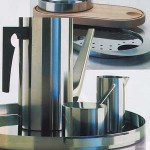 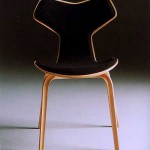 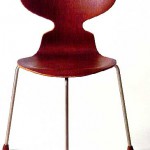 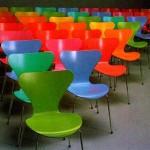 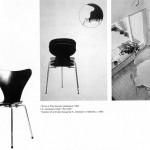 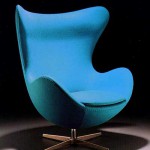 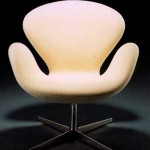 Arne Jacobsen´s designs came into existence as brief sketches and were then modelled in plaster or cardboard in full size. He kept on working until his revolutionary ideas for new furniture had been realized at the utmost perfection. The “Ant” from 1952 became the starting point of his world fame as a furniture designer and became the first of a number of lightweight chairs with seat and back in one oiece of moulded wood.

Model “3107” from 1955 is often merely called ” The Number Seven Chair”. It was launched in beech, black and white. The colour scale has through the years been further developed by a.o. the Danish architect Verner Panton and the Danish painter Poul Gernes 1925-96 and today includes a variety of colours in lacquer or lazure as well as beech, maple, ash, and cherry. “3107” has become the most important success in Danish furniture history – manufactured in more than 5 million copies.

The Royal Hotel 1956-61, situated in Copenhagen, is one of Arne Jacobsen´s masterpieces. For the decoration of the hotel he designed several pieces of furniture, lamps and fabrics, and also cutlery, glasses, and door handles. As significant counterpoints to the stiffly upright, monumental building his easy chair, the “Swan” and the “Egg”, stand out as organic sculptures.

During the 1960´es Arne Jacobsen turned to forms as the circle, cylinder, triangle, and cubus. On the whole, his mind as an architect began to influence his design. Both the stainless steel tableware set “Cylinda-Line” and the lamp series “AJ” reflect this. Common to all Arne Jacobsen´s designs is that they have become international design classics.

“The Ant” and “The Number Seven” ´chairs made Arne Jacobsen world famous as a furniture designer and made Fritz Hansen an international manufacturer of design and quality furniture. Fritz Hansen´s collection of timeless furniture includes both well-known Danish classics and more recent furniture series designed by Danish and international designers.