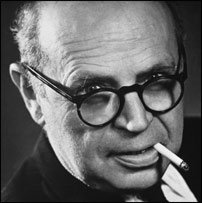 “From the age of 18, when I began to experiment with light, I have been searching for harmony in lighting”

Poul Henningsen was born in 1894 in Ordrup, Denmark and became Denmark’s first expert in lighting theory. Even though Poul Henningsen’s is mostly known from his lamps his talent was very diversified. He was trained at the Technical School and the Danish College of Technology, Copenhagen. Ever since 1920 Poul Henningsen worked as an independent architect in Copenhagen where he designed several houses, a factory, a part of Tivoli, and the interiors of two theaters. Beside working as an architect Poul Henningsen wrote articles for several newspapers and periodicals, he scripted a number of revues for Copenhagen theaters, he wrote poems, and was the editor of the magazine “Kritisk Revy” (Critical Revue). From his writings Poul Henningsen was known as a seriously and sharp critical of society and architecture.

As a Copenhagener Poul Henningsen often drove through the city and was shock by what he saw: “When, in the evening, from the top of a tram car, you look into all the homes on the first floor, you shudder at how dismal people’s homes are. Furniture, style carpets, everything in the home is unimportant compared to the positioning of the lighting. It doesn’t cost money to light a room correctly, but it does require culture.”

“It has always been the idea that the PH-lamp should be the lamp for the home. Due to its qualities and its modern appearance it had to be accepted first in offices and public buildings, but it is constructed with the most difficult and noble task in mind: lighting in the home. The aim is to beautify the home and the who live there, to make the evening restful and relaxing.”

In 1924 Poul Henningsen designed his multi-shade lamp. It was the first of what later became known as the “PH-lamp”. The design was based on scientific analysis of a lamp shade’s function. The size, shape, and position of the lamp shades determine the distribution of the light and the amount of glare. In 1924 this lamp won a competition for light fitting for the Paris World Exhibition, and is known as the “Paris lamp”. Poul Henningsen maintained the principle of the Paris lamp throughout his lifetime.

“The task to find a new lighting feature, where the emphasis is on the problem of glare. This is what is attempted with the PH-lamp, and much to indicate that it has been successful.”

Poul Henningsen’s lamp shades are made of separate elements, shaped and assembled in such a way that they cover the bulb and direct the light down upon the table without the rays being reflected more than once. Beside this they give a general light in the room, so that the contrast between the illumination of the walls and table is not to sharp. Within the lamp shade itself the light is distributed so as to lessen the intensity towards the outer edge of each separate element. In this way Henningsen has avoided the abrupt transition from light to darkness which we find, for example, with an ordinary spherical pendant shade in opal glass. To bring the rather harsh white light towards the red end of the spectrum, Henningsen has given the inner side of one element of the shade a red color.

Poul Henningsen did not grew up with the electric light but in the soft glow of the petroleum lamp. His constant inspiration and aim was to cultivate the electric light to achieve a similar softness but yet utilize this new powerful light source.