Poul Henningsen developed the PH 5 in 1958 in response to the constant changes made to the shape and size of incandescent bulbs by bulb manufacturers. When introducing the iconic piece, Poul Henningsen wrote:

“After 33 years of basically Christian behaviour I have converted to Islam in my relationship to the manufacture of incandescent bulbs. For a generation I have believed that consideration for the consumer and common sense would prevail, but now I have become a fatalist. I have accepted fate, and with Louis Poulsen´s permission I have designed a PH fixture which can be used with any kind of light source (…)”. 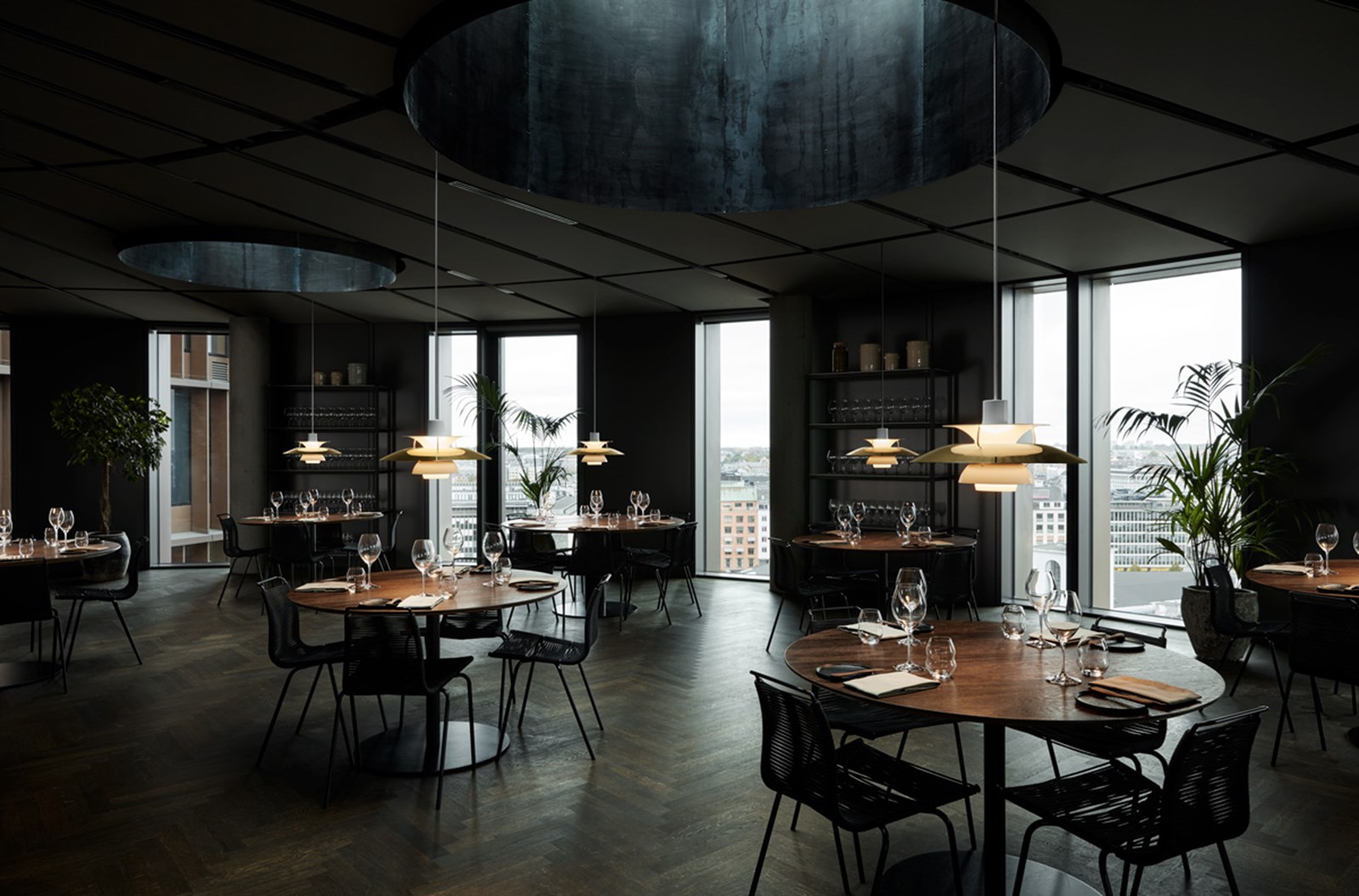 Recognised for its pioneering design, the PH 5 continues to serve as a beautiful sculptural interior design element synonymous with the PH light philosophy, which remains completely glare-free, irrespective of the way in which the light is installed or the light source used. 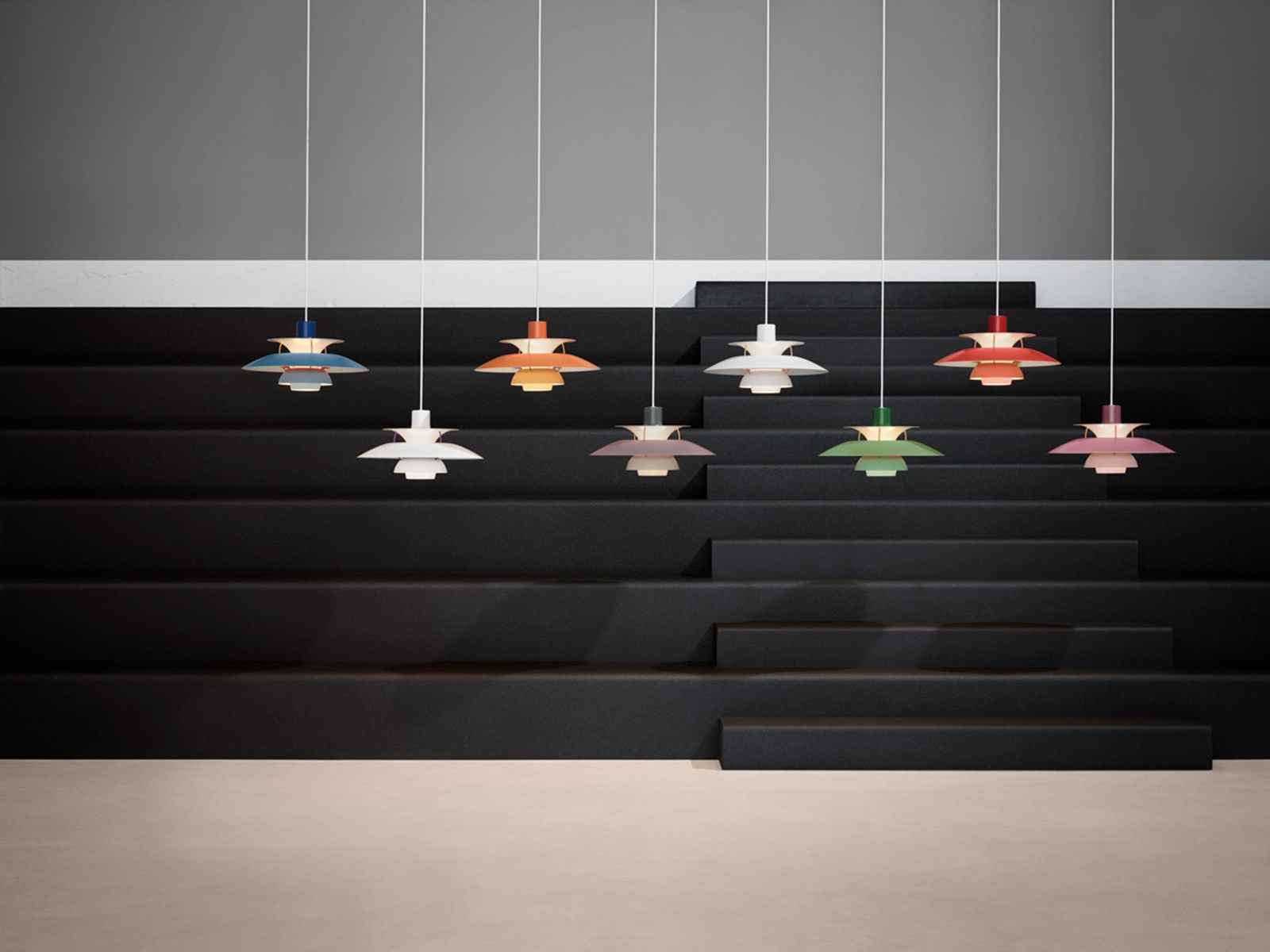 With the PH 5, Henningsen also wanted to improve the colour reproduction characteristics of the light source. Small red and blue shades were therefore inserted to supplement the colour in the part of the spectrum where the eye is least sensitive – the red and blue areas – and to subdue the light in the middle yellow-green region where the eye is most sensitive. The red and blue rings are, however, no longer necessary in order to achieve superior light quality as contemporary light sources reproduce daylight far better than in Henningsen’s day. 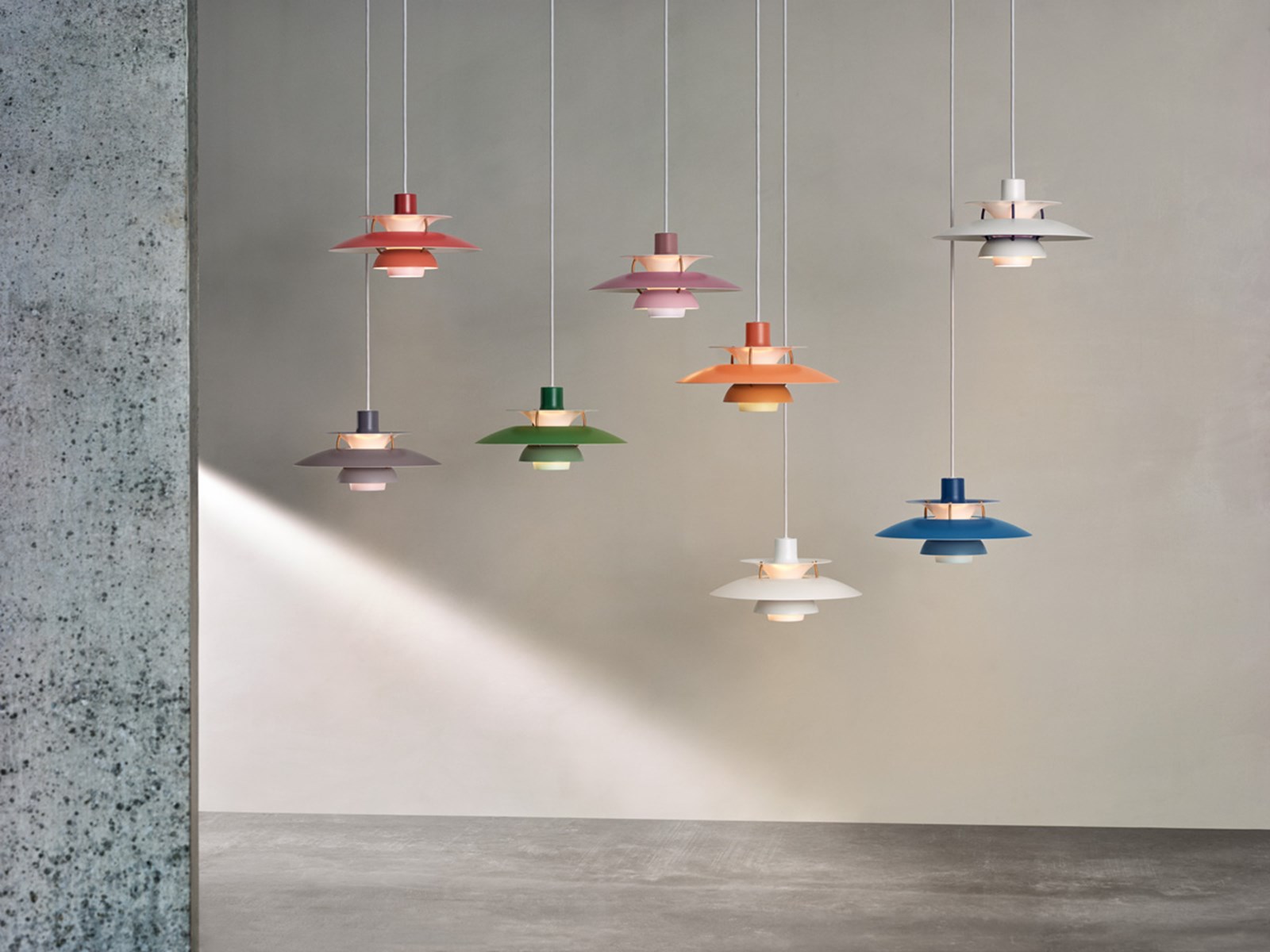 In Autumn 2020, the PH 5 series will be introduced in a monochrome palette that emphasises Henningsen’s striking design and the pendant’s iconic shape to bring a touch of elegance and contrast to any interior. The PH 5 and the recently launched PH 5 Mini will be available in matt painted metal shades in Black, White and a vibrant Blue for the bold decorator. All versions have white inner sides for optimum light reflection. 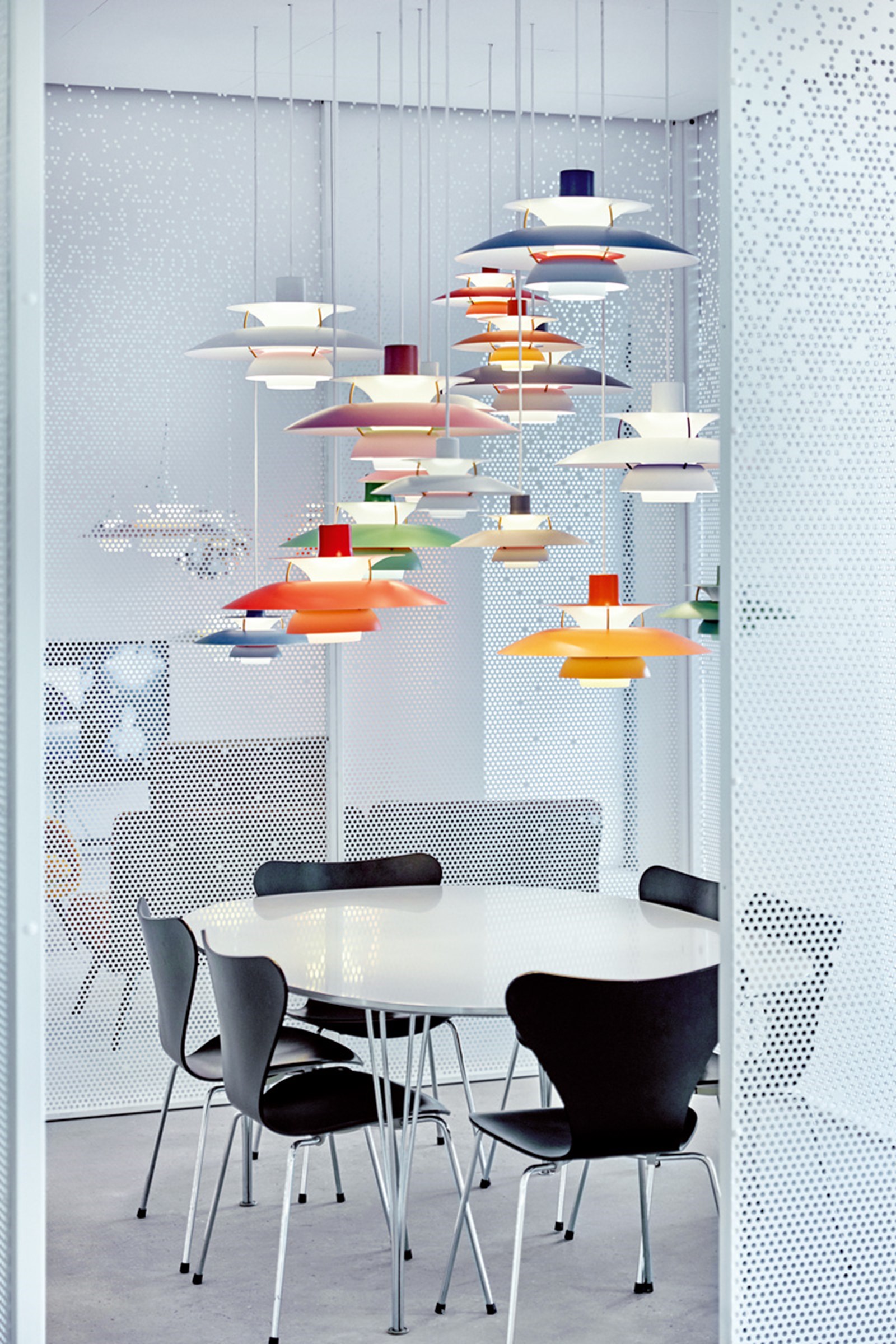 The PH 5 and PH 5 Mini in Monochrome will be available from September 2020. 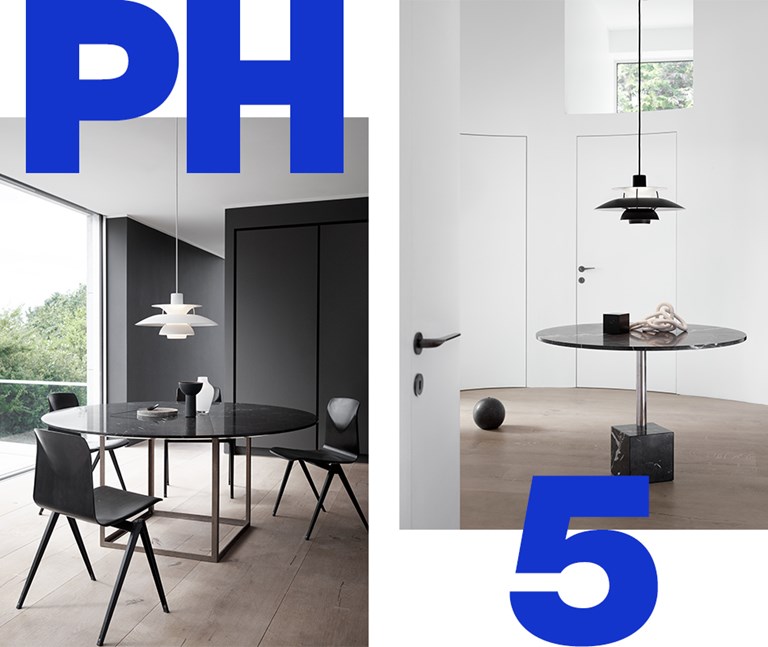 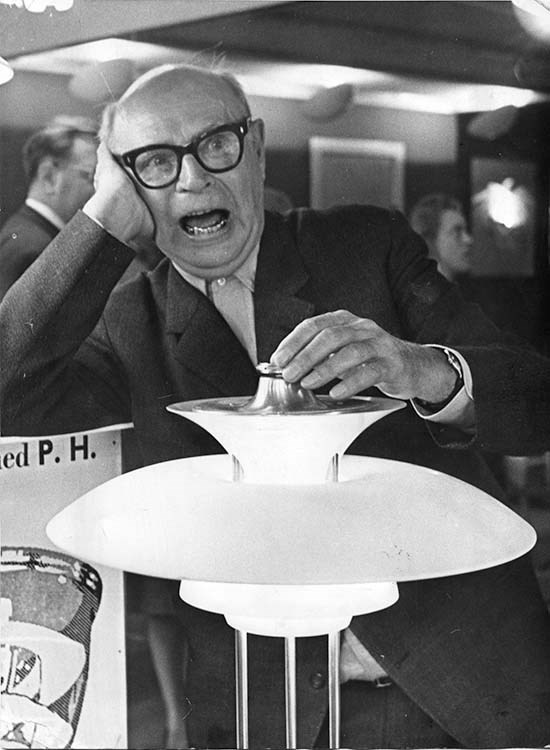 Poul Henningsen was born in Copenhagen to the famous Danish writer Agnes Henningsen. He never graduated as an architect, but studied at the Technical School in Frederiksberg from 1911-14 and then at the Technical College in Copenhagen from 1914-17. He started out designing traditional functionalistic architecture, but over the years he changed his professional focus to concentrate on lighting, which is what he is most famous for.

He also expanded professionally into writing, becoming a journalist and an author. For a short period at the beginning of World War II, he was head architect of the Tivoli Gardens in Copenhagen. But like many other creative people, he was forced to flee Denmark during the German occupation. However, he soon became an important member of the Danish colony of artists living in Sweden.
His lifelong collaboration with Louis Poulsen began in 1925 and lasted until his death. To this day, Louis Poulsen still benefits from his genius. Poul Henningsen was also the first editor of the company magazine NYT. Sophus Kaastrup-Olsen, CEO of Louis Poulsen at the time, gave the magazine to PH as a gift because he had been terminated from the Danish newspaper for which he worked (in the opinion of the newspaper management, his opinions were too radical).
Poul Henningsen’s pioneering work on the relationship between light structures, shadows, glare, colour reproduction and man’s need for light remains the foundation of the lighting theories still practised by Louis Poulsen.