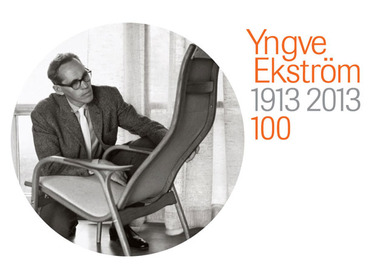 Our master and founder Yngve Ekström would have been 100 on 16 June 2013, if he had lived. Though one can say that he is still alive: Yngve Ekström’s furniture is more contemporary and modern than ever, both in Sweden and internationally.

Take, for example, the beautiful and comfortable easy chair Lamino, selected as the furniture of the century, which recently resigned supreme in a Selfridges’ shop window in London and is still Swedese’s most sold item. Where does the Nobel prizewinner Tomas Tranströmer sit when he is interviewed about his poetry? A Lamino naturally!

And the company Swedese, which Yngve Ekström founded and managed for 30 years or so with his brother Jerker is truly flourishing. In 2013 Swedese is expanding, profit-making and a front runner within design development, both prize-winning and internationally well-known and respected.

Yngve Ekström was one of the Scandinavian architects/furniture designers whose style became world famous under the epithet of “Scandinavian Modern”. He was born in Hagafors in Småland on 16 June 1913 as the second son. His father Oskar made Windsor chairs in the local chair factory and his mother Sigrid had a type of café in their home after their father died while the boys were still small. Yngve worked in a furniture factory from the age of 13, but continued to improve his skills for very many years. Initially he took evening classes after work, then took extra-mural courses in painting and drawing, and also through the Röhsska Design Museum in Gothenburg. He became an autodidact and fascinating all-round artist, who could express himself through sculptures, textiles. photos and poetry – and then also as a manufacturer and product developer. His brother Jerker was managing director and head of production while Yngve was responsible for the colletion, image, advertising and catalogues (texts, design and photography!).

But more than anything else we remember Yngve Ekström for the beautiful furniture he created. Not only Lamino, but also the retro sofa and easy chair Accent, comfortable and attractive easy chairs such as Laminett, Primo and Rondino – and not least, the elegantly beautiful garden chair Desirée. To name but a few.

Yngve Ekström had his own profile – and that profile still holds today!

We are celebrating Yngve Ekström’s jubilee throughout the year, including a relaunch of one of his pieces of furniture at the end of summer. Still a well-kept secret. Until then: we cheer all summer for Yngve Ekström!