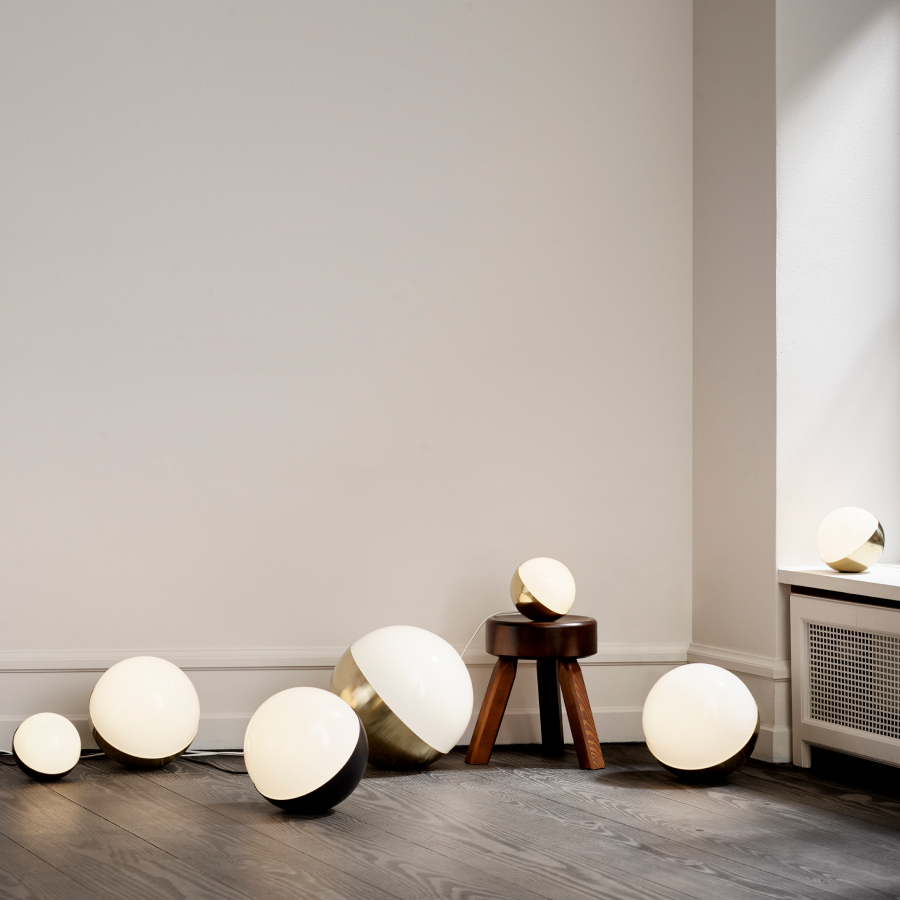 After revisiting the archives of Danish architect Vilhelm Lauritzen and his 1930s Gesamtkunstwerk Radiohuset in Copenhagen, Louis Poulsen introduces an updated version of Vilhelm Lauritzen’s original studio wall lamp, as well as a modern reinterpretation for the table or floor, in spring 2022. 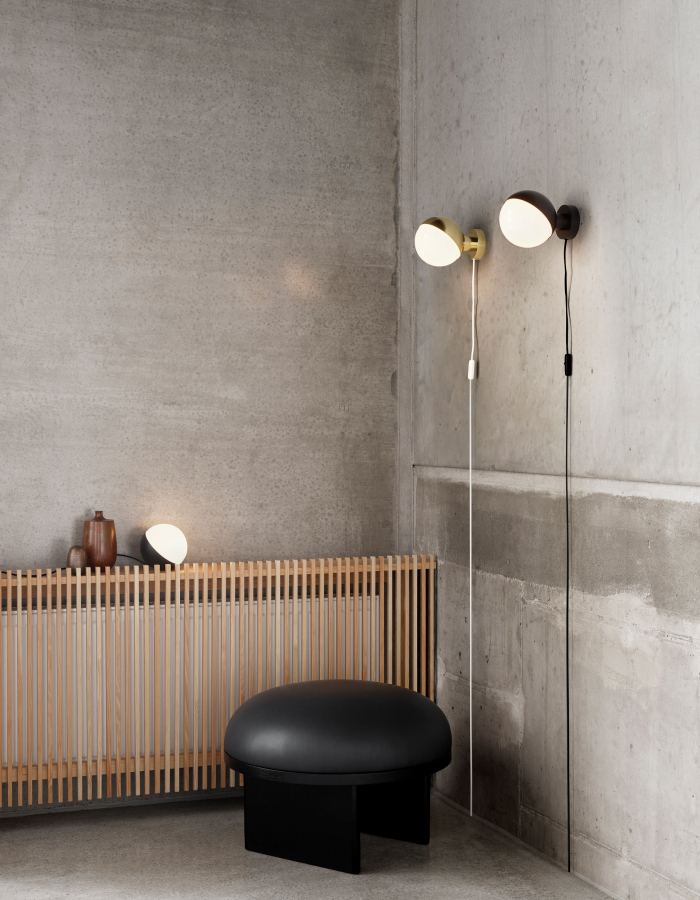 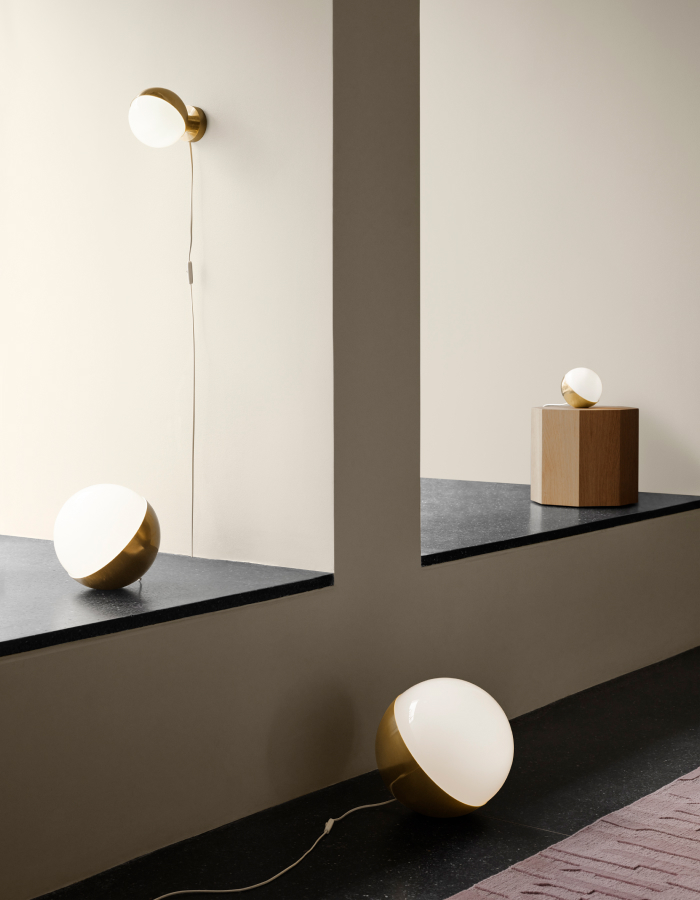 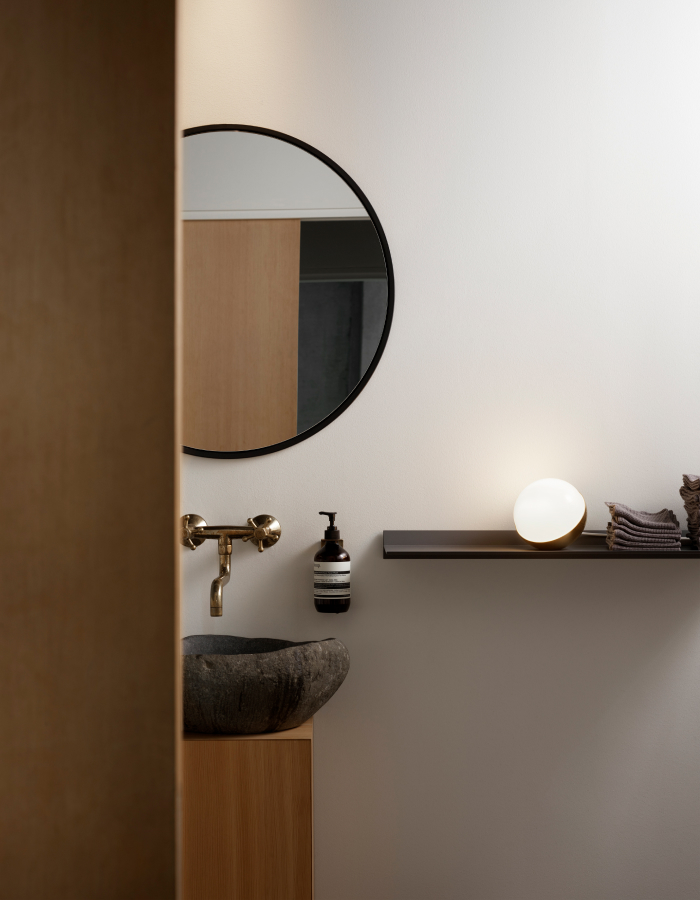 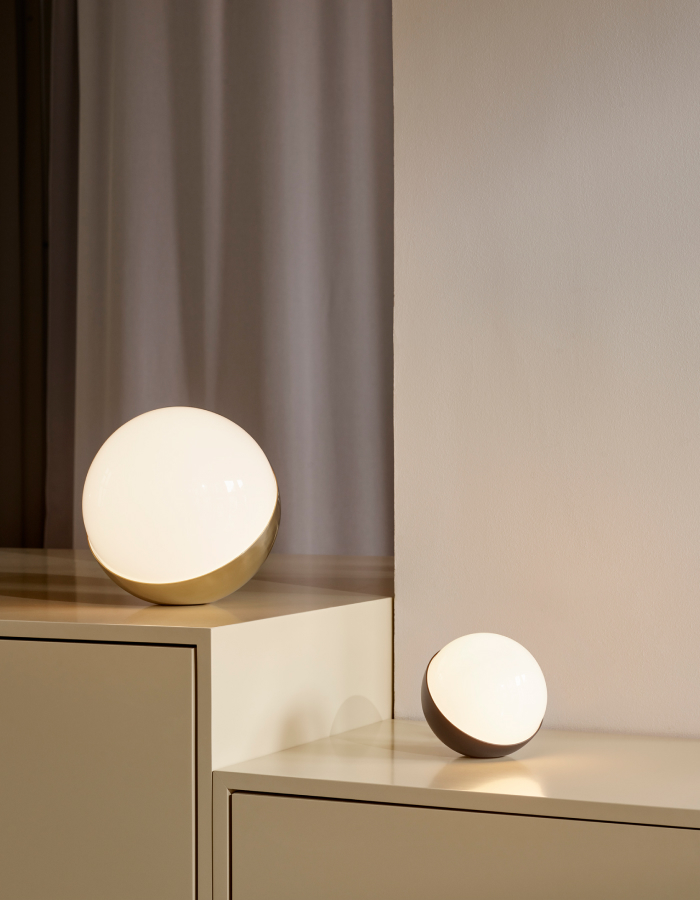 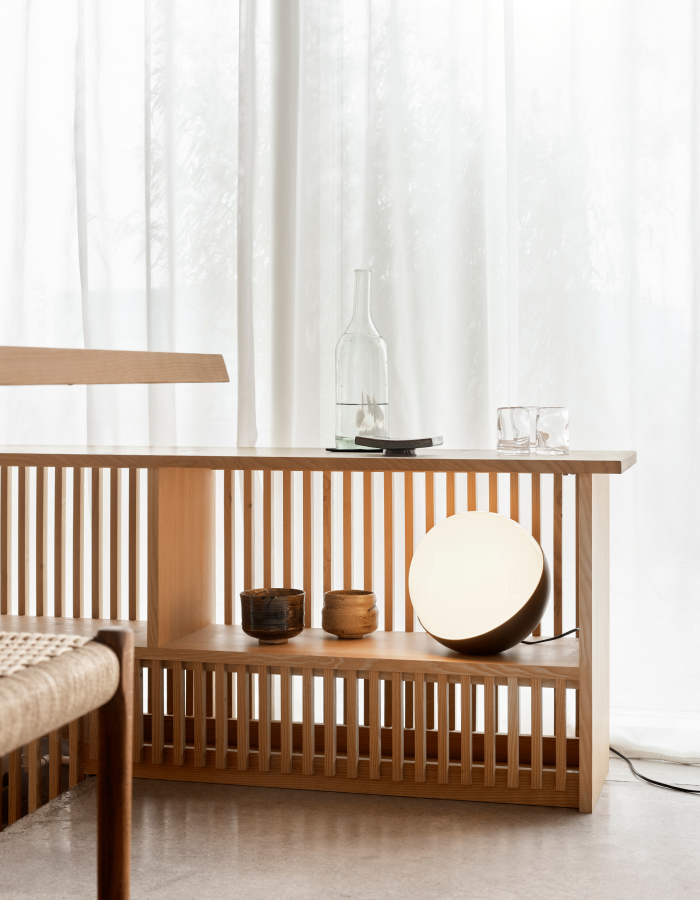 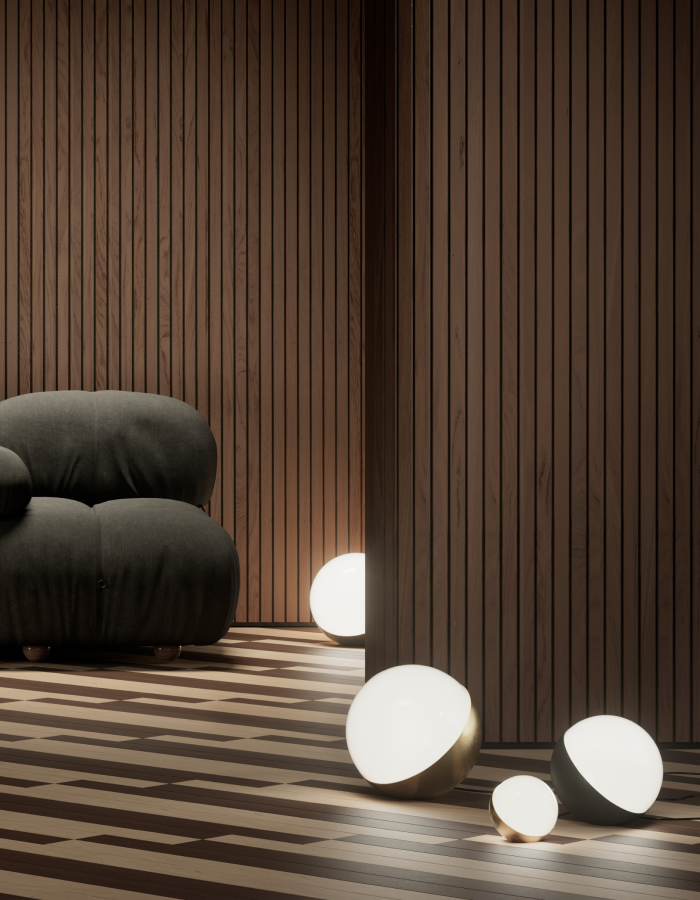 In the 1930s, Vilhelm Lauritzen created a complete work of art, when he designed Radiohuset as well as all the lighting for the building which accommodated the Danish Broadcasting Corporation at the time. Lauritzen created every fixture for Radiohuset that were to become no less than iconic lamps.

The studio lamp was named after its function outside the broadcasting studios in Radiohuset, where it indicated with a red or green light, whether the studio was recording. The lamp with its opal glass and white, warm light was also used around Radiohuset. It was designed in the same period as the VL38 Table lamp, the VL Ring Crown and the VL45, also known as the Radiohus pendant. In fact, the studio lamp is closely related to the Radiohus pendant, as they both emit a diffused light through three layers of mouth-blown, opal glass that spreads a very pleasant general light in their surroundings.

The VL Studio Wall lamp has been subject to minor modifications compared to the original lamp. The wall box has been adapted so the fixture can be mounted directly onto the wall, and a G9 socket now ensures even more uniform illumination. The VL Studio Wall lamp is also available in a matt black finish for a more graphic expression, as well as the classic brass version, which is slightly brushed and will develop a distinct patina over time.

The angle of the lamp head can be turned 90 degrees to each side to direct the distribution of the glare-free and diffused light. The VL Studio Wall lamp is equally suitable in the recreational areas of hotels, in retail, lounges, offices or other public spaces as it is, for instance, in the bathroom, the nursery, the dining room or in any other room in the home.

The same high-grade lighting qualities apply to Louis Poulsen’s new table and floor interpretation of the studio wall lamp, where the smallest size of Ø150 is the same as the wall version. The Ø250 and Ø320 are both new sizes and come complete with dimmers. All three sizes create outstanding ambiences on tables or when placed at lower heights or on the floor in retail concepts, restaurant corners or windowsills, hotel rooms, corridors and boutique hotels, as well as in living rooms, bedrooms, hallways and other locations that will benefit from a cozy touch of elegant illumination. 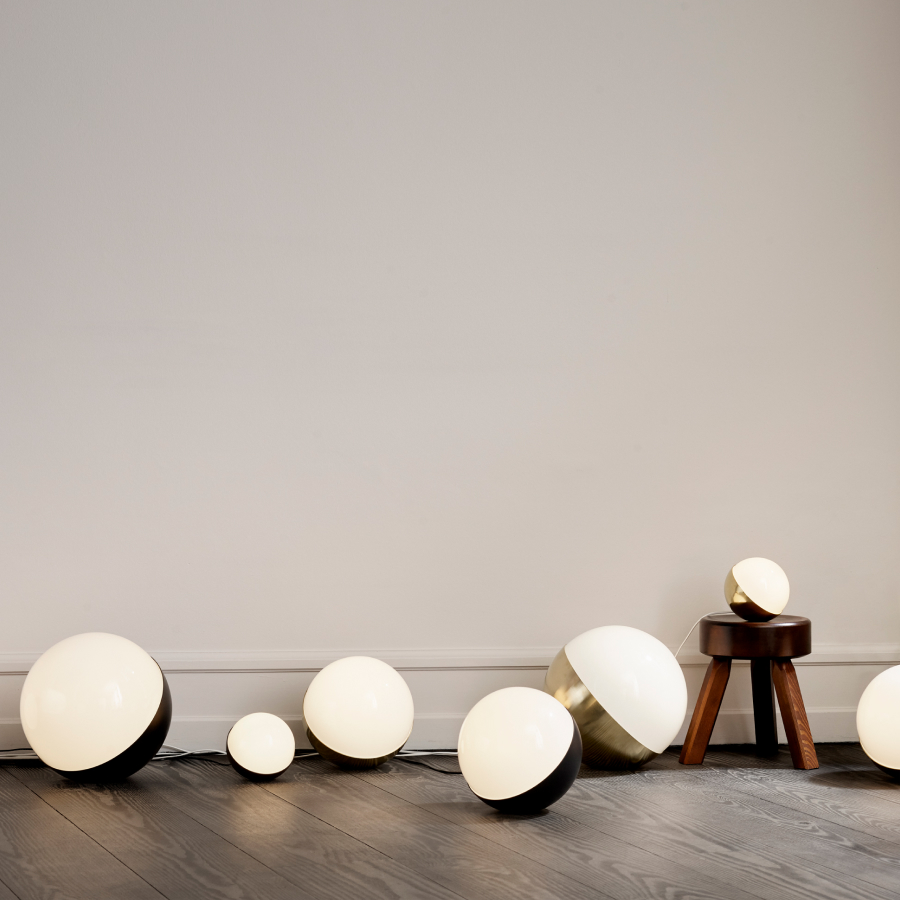 The new VL Studio Table lamps are perfect for interior décor experiments, as they look exquisite when combined with other Vilhelm Lauritzen designs, when grouped in islands of light, and even on their own, they give satisfying new life to any space. 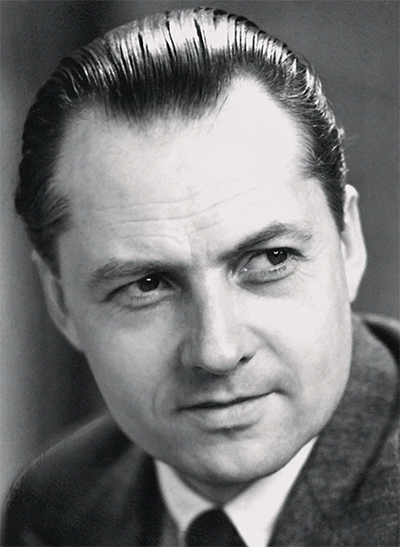 Vilhelm Lauritzen
Vilhelm Lauritzen (1894–1984) is one of the most significant architects in the history of Denmark; he was the trail-blazing figurehead of Danish functionalism. A number of his buildings – Nørrebro Theatre (1931–32), Daells Varehus department store (1928–35), Radiohuset (1936-41) and the first airport built in Kastrup (1937–39) – represented the concentrated essence of contemporary life. Other significant buildings to stem from Lauritzen’s drawing board include Folkets Hus (1953–56) better known today as the Vega concert venue, the Shellhuset (1950–51) building and the Danish embassy in Washington (1958–60). In particular the Radiohuset building and the earliest version of Kastrup Airport – both listed today – are considered peerless monuments to modernism in the European genre of construction.