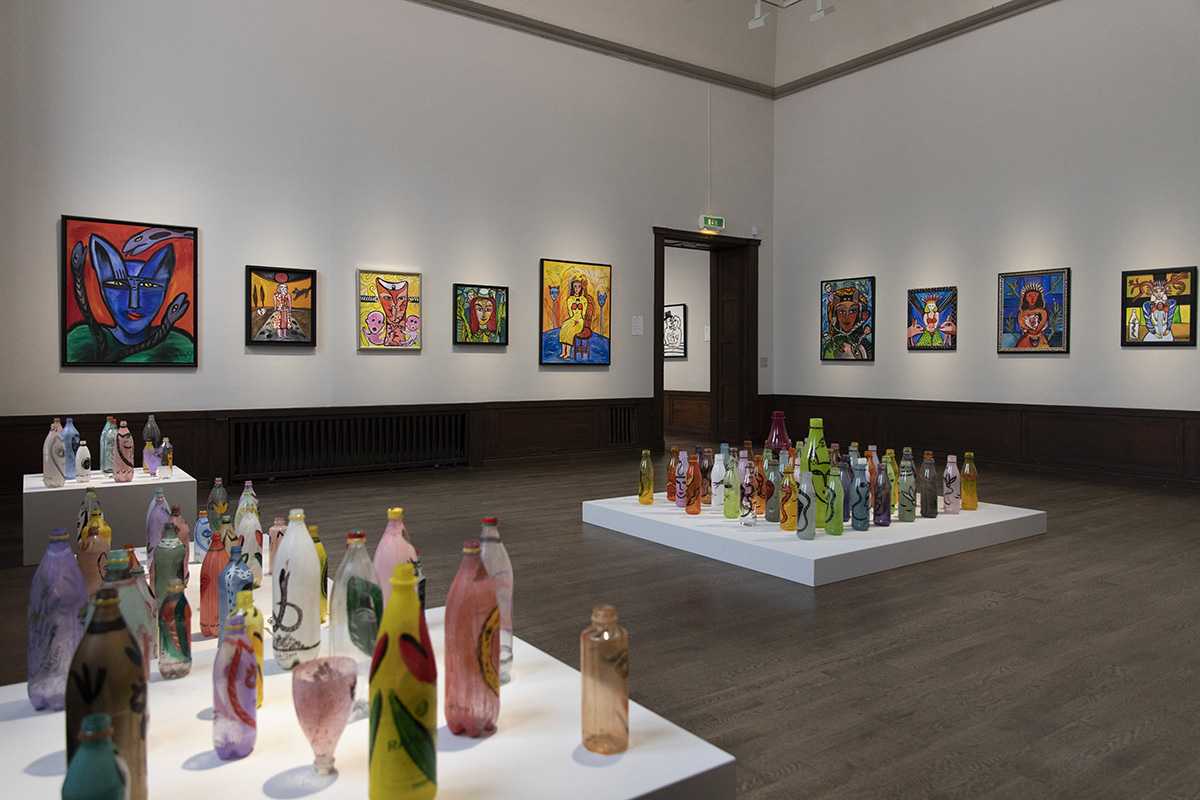 Popular and colorful Ulrica Hydman Vallien is for many best known as a glass designer. But she was an all-round artist whose pen and brushes were always in motion. The exhibition “A Paradise Attack” shows how life and art were one for her, and how energy and joy also carry a darkness.

The exhibition commissioner is Staffan Bengtsson, who has followed Ulrica Hydman Vallien’s artistry for three decades. As a designer and artist, Ulrica Hydman Vallien was unique and uniquely productive. Ceramics, glass, textiles, airplanes, Easter eggs and furniture – there was nothing she didn’t paint or draw on! She made Swedish glass art popular for real, but also had an international reputation.

Ulrica Hydman was born in Stockholm in 1938, the oldest in a sibling family of five where three attended Konstfack. Ulrica was educated there from 1958 to 1962 in the Department of Ceramics and Glass, with Stig Lindberg as one of the teachers.

At Konstfack she also met Bertil Vallien, who became her husband in 1963. Together they made study trips in the USA and Mexico, among others, and worked there with ceramics. The inspiration from Mexican folk art was one of many art experiences she carried with her.
Matisse and Léger, David Hockney and Frida Kahlo were artists who also meant a lot to her.

She was a skilled cartoonist and participated every year between 1964 and 1972 in Nationalmuseum’s annual exhibition Young Cartoonists. In 1972 she was named Sweden’s best. “At its most outspoken, I think, her artistry in the drawings, they also surpass the fabulating of the paintings,” Staffan Bengtsson writes in the catalogue.

Her debut exhibition in 1965 was with ceramics, but after the couple settled down and started working at Åfors glassworks in the early 1970s, she also began experimenting with glass. The same imagination and playfulness that her ceramics showed, she also transferred to the glass in many series such as Caramba and Open Mind.

Her imagery is very own and easily recognizable – few mistake her tulips or snakes. She was one of fifty artists from different countries invited by British Airways to decorate their fleet of aircraft. Airplane tails, crockery and stationery – everything got an unmistakable Ulrica touch!

The exhibition at Liljevalchs will not be chronological but themed. Over 500 works are exhibited, glass, ceramics, paintings, drawings and objects. Here, halls with only drawings, halls with ceramics and also a reconstruction from her last exhibition at vida museum on Öland will be summer and autumn 2018, with a stripped-down painting.

She herself, together with Staffan Bengtsson, planned the exhibition but died suddenly and unexpectedly in March 2018, three days before her 80th birthday.

A few years later Björn Kjelltoft graduated from Konstfack and his thesis became a kind of tribute to Ulrica Hydman Vallien. On regular discarded PET bottles, he painted tulips and snakes and eyes à la Ulrica. Ulrica ended up picking up the replica and started producing her own PET bottles, but now in hand-blown glass down at her Småland glassworks in Kosta. THANK YOU, BJÖRN, she called the project. Which (of course) was another commercial success!