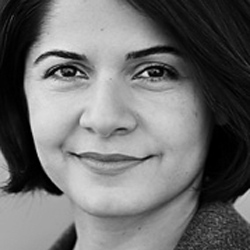 Shideh Shaygan was born in Tehran, Iran in December 1966. She moved to Sweden after she finished her high school degrees. She then studied Interior Architecture and Furniture Design at the National College of Art, Crafts and Design in Stockholm 89–94, and at the Middlesex University in London in 92–93.

Her practice undertakes commercial projects, articulating and amplifying commercial operations through design, as well as bespoke private residences and exhibition projects. When the scale of the projects so requires, she collaborates with or sub-contracts leading architectural practices in Sweden and the UK.

Her interest in architecture and design started when she lived in Iran. She was constantly exposed to the traditional Islamic architecture as well as the modernist developments. In the early 50s, Tehran went through a huge transformation architecturally as well as culturally. Most of the residential developments were very much in line with “The Case Study Houses” in LA since Iran’s strongest ally was America from late 40s to late 70s. She could see how the buildings influenced and shaped the social structure of the people who lived in them.

She is interested in studying local cultures, the way different cultures merge or interact with each other through architecture and interior design. When she designs, she always seeks to understand her client’s expectations functionally, aesthetically and culturally. In this process, she believes, it is important to challenge the conventions in a very subtle way, almost not recognizable at the first encounter, yet enhancing people’s curiosity and engagement.