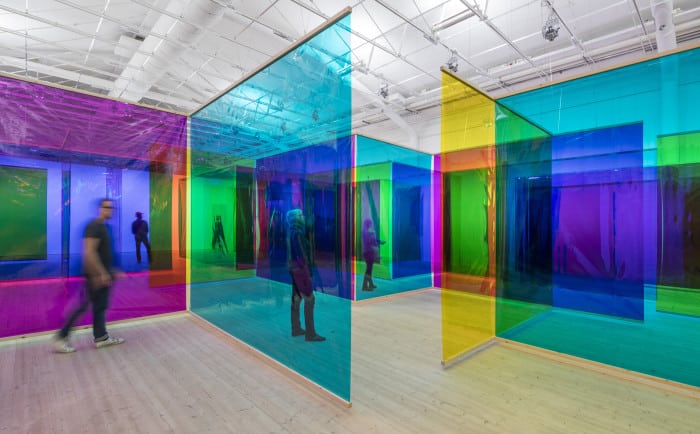 A fan circles in irregular paths above our heads, water is pumped frantically up in cascades, and in another of the halls we walk in a labyrinthine architecture of colored space. The works are all part of the exhibition Olafur Eliasson: Reality machines. The exhibition is a collaboration between the Modern Museum and ArkDes and appears in both premises.

Olafur Eliasson (b. 1967, Denmark / Iceland) is one of today’s most acclaimed artists. Since the early 1990s, his work has been featured in numerous exhibitions worldwide. Eliasson works in sculpture, painting, photography, film and installations, but also with architectural projects and site-specific works in the public domain. Light, wind and water in all its forms is a recurring feature. Despite this, nature is rather present as plant material than as subjects.

In the meeting with Eliasson’s installations, it is not always obvious where the art object ends and the viewer begins. The focus moves from the art object itself to the experience of seeing. At the same time provokes Eliasson’s work situations in which our perception of reality is challenged, renegotiated and reinterpreted.

Perception is central to Olafur Eliasson’s oeuvre. He has described his works as a tool to critically explore the outside world, thereby creating new perceptions of reality. It is about becoming aware of what we see, but equally important to be aware of ourselves when we see. That in a situation of attention to both our presence and participation, “seeing yourself seeing”, with the artist’s words. In the early work Beauty (1993) is a perforated tube mounted on the ceiling in a darkened room.

A visible headlights illuminate smokescreen produced by the thousands of droplets that fall to the floor. But the work arises only when we are in a certain angle to the light when refracted in water droplets. The experience of the visual effects that occur vary depending on your position in the room. Although the artwork is made up of physically concrete components, the beauty fleeting and immaterial – an optical phenomenon. Delusions are broken. Agency, as well as our view of reality, it recreates, manifested as construction.

For the exhibition A richly illustrated catalog with images from the exhibition. The catalog is designed by one of the world’s leading graphic designers, the Dutch Irma Boom. Here you can read text samples: