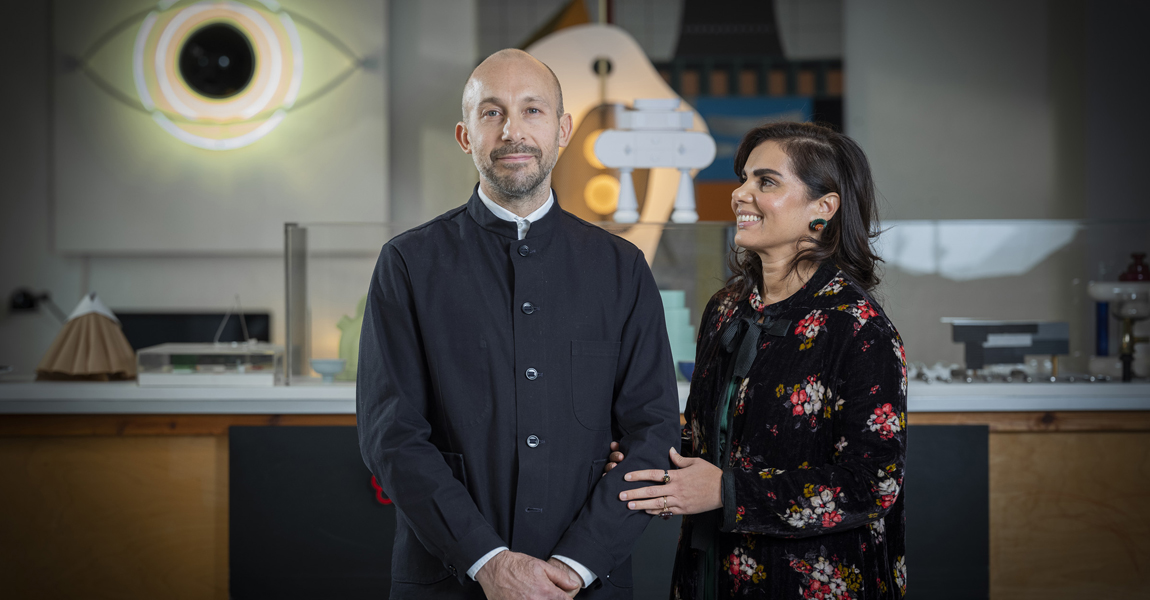 Design studio Doshi Levien is the Guest of Honour at Stockholm Furniture & Light Fair 2020. With their exhibition in the Entrance Hall, the Indian-British designers aim to give visitors an insight into their creative process, revealing for the very first time, their drawings and prototypes side by side with production pieces.

“It’s a huge privilege to be Guest of Honour and to have thousands of people pass through a version of our studio,” comments Jonathan Levien. “We are so thrilled that our clients were able to make pieces specially for this exhibition.”

It is clear that Levien and his partner Nipa Doshi have enthusiastically embraced the assignment. The wealth of drawings that have been sent to the fair’s workshop show a labyrinth of inter-connected vaulted spaces – long and narrow, short and wide – inspired by churches the couple visited on a recent trip to Palermo. Concentrated beams of light cut through the dense spaces, highlighting the sensual and organic designs from Doshi Levien’s rich portfolio.

“When we tackle an assignment, whether it’s designing a fabric or a lamp or an armchair, we like to pass the idea through an architectural filter,” explains Doshi. “We want to create interior components that architects can use to define space.”

“The exhibition can be seen as a re-interpretation of the simple prototypes we’re experimenting with in our London studio,” explains Levien. “There, we work in wood and cardboard. Here, we’ve used a solid wood structure clad in thin plywood. A ‘skin and bone structure’ that reflects our way of making prototypes in the studio. The wood has been grown locally to minimize transport the materials are reused after the fair. We’re hanging our prototypes up on the plywood walls, alongside drawings and the finished product, to give visitors an insight into our working process.”

According to Levien and Doshi, the exhibition marries the couple’s sometimes conflicting talents. Levien, a trained cabinet-maker and industrial designer who grew up in a manufacturing family in Scotland – his parents made toys – has a gift for structural design. Doshi grew up in central Delhi and trained at the National Institute of Design, a school that crosses traditional Indian crafts with innovative and experimental designs. Nipa’s practice is rooted in her plural upbringing and astute eye for visual culture. According to the designers, the best ideas happen when they interpret each other’s drawings, merging the best of each other’s skills.

“Beauty is often a bad word in design because it’s not quantifiable – it’s subjective and something that is considered superficial. But beauty has a huge function, not least because it makes you feel better about yourself. When you see something beautifully made, you can sense the love and craftsmanship that has gone into it. That is the concept of beauty we present at the fair: an atelier of ideas, the spirit of our studio.”

Read more about our Guest of Honour 2020 here »