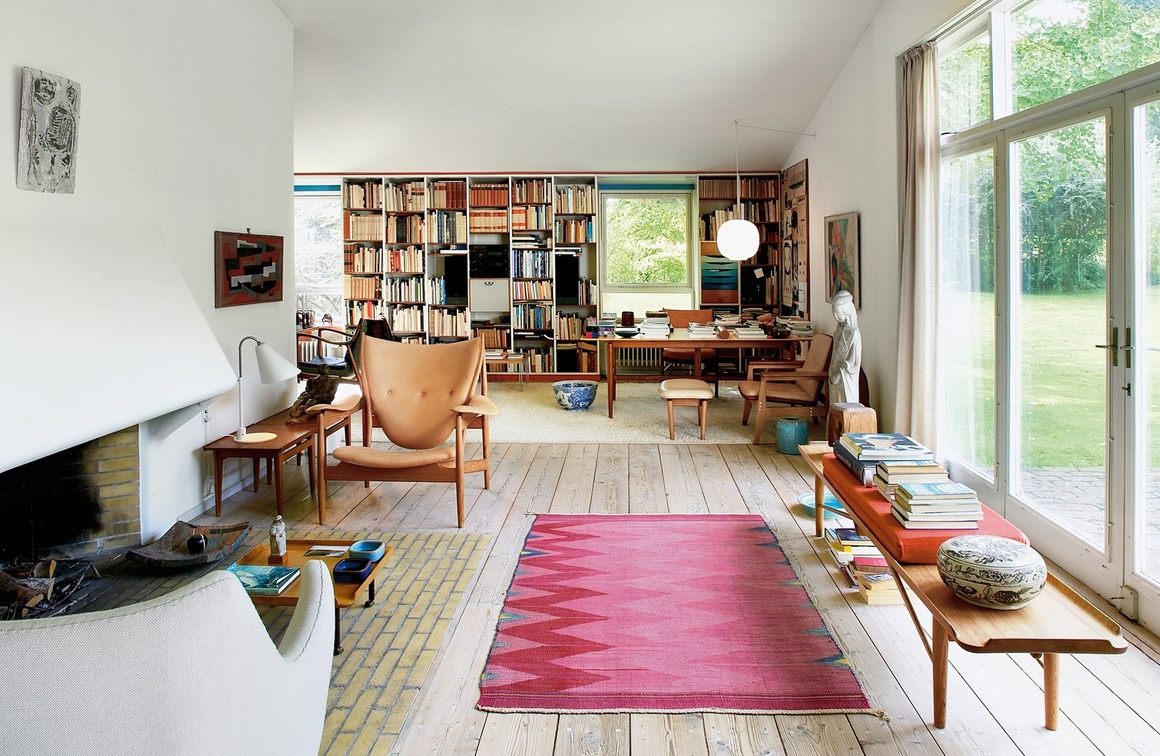 One can argue that Finn Juhl’s most extraordinary piece is his own home, situated in Ordrup, North of Copenhagen. The residence, which is now part of the museum Ordrupgaard, boasts an inspiring compilation of impressive design facets, turning any visit into a full experience, instantly sparking an appreciation of Finn Juhl’s unique talent.  This is not only derived from the plethora of iconic pieces of furniture, which are to be considered as an extension of the house itself, but also because of the way each room, the colours, the light and, last but not least, the art bind it all together.

The residence has been closed for years as part of the extension that is being added to Ordrupgaard. The new building is designed by the Norwegian architecture firm Snöhetta. This month on the 25th, Finn Juhl’s House will once again open to the general public. The new part of the museum will open on August 14th. 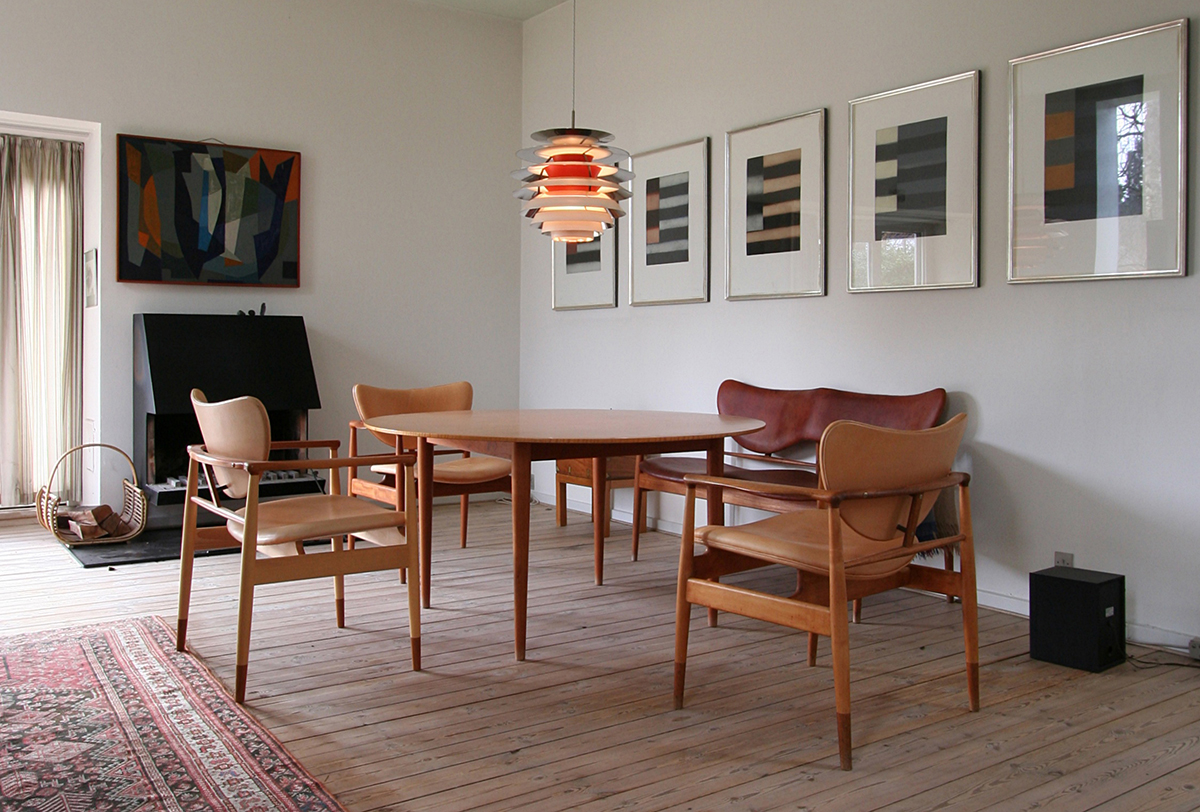 A collection of Finn Juhl’s furniture, including the 48 Chair and the 48 Sofa Bench, is situated around a circular table in the largest bedroom of the house.
Above the table is a Contrast lamp designed by Poul Henningsen

“When I build a house, I don’t like
others to come and spoil it”

Finn Juhl built the house on Kratvænget in 1942, where he lived and worked until his death in 1989. During this time span, he would continuously work on the interior of the house, even the smallest details were curated to perfection. Over the years he would add more and more of his own furniture to the interior design and elaborated: “When I build a house, I don’t like others to come and spoil it”.

Even though Finn Juhl originally studied architecture at the Royal Academy of Arts, he would end up designing only a handful of houses. He instead turned to interior and furniture design and eventually became famous for groundbreaking and daring pieces such as the Pelican Chair and the Chieftain Chair.

Finn Juhl chose to design his own house based on the premises of the interior – he designed it from an inside-out perspective. The furniture and interior would influence how each room ended up, and each room would in turn influence how the exterior of the house would be shaped.

The house is comprised of two buildings, joined by a connecting hallway with its own entryway. This house nicely exemplifies a time when Danish architects slowly but surely shifted more towards designing houses with open floor plans. 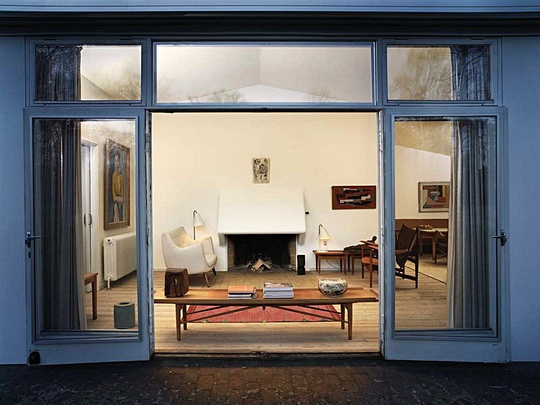 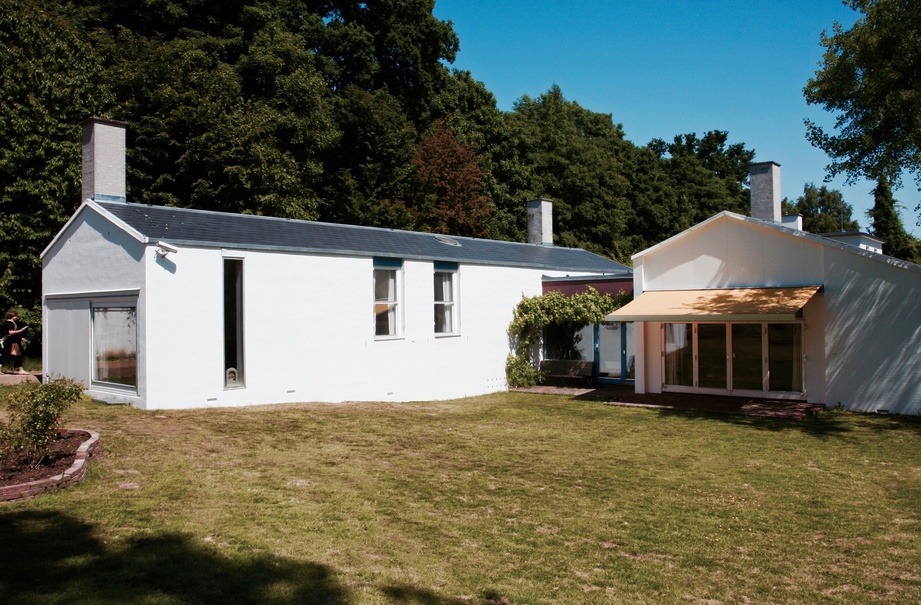 Large windows and doors make the garden a natural extension of the interior.

The Dynamic Change of the Interior

Finn Juhl was incredibly dynamic when he designed the interior of his house and he would continuously change the pieces constituting its interior design as his own portfolio grew. For the first couple of years, when he was living in the house, he had Windsor chairs in his dining room, but he would promptly replace these with Egyptian Chairs once he had designed these. Some of the pieces in the house were also designed to serve a specific purpose in his own home, e.g. the Poet Sofa which is placed in the living room, right underneath a portrait of Hanne Wilhelm Hansen which was painted by the artist Vilhelm Lundstrøm.

“Finn Juhl was incredibly dynamic when he designed the interior of his house and he would continuously change the pieces constituting its interior design as his own portfolio grew.”

Besides in his own house, Finn Juhl’s furniture can be seen multiple places in the museum. Among them is the Pelican Chair from 1940, which creates a neat dialogue between itself and the modern architecture of the museum.

The bricks employed to create the fireplace extend into a rectangular shape in the hardwood floor,
creating the illusion of a carpet and defining a smaller room within the bigger room.

Finn Juhl drew the watercolour floor plan of the house in 1968, more than 25 years after the house was finished.
The floor plan shows a separate building, intended to house Finn Juhl’s study, but it never materialized. 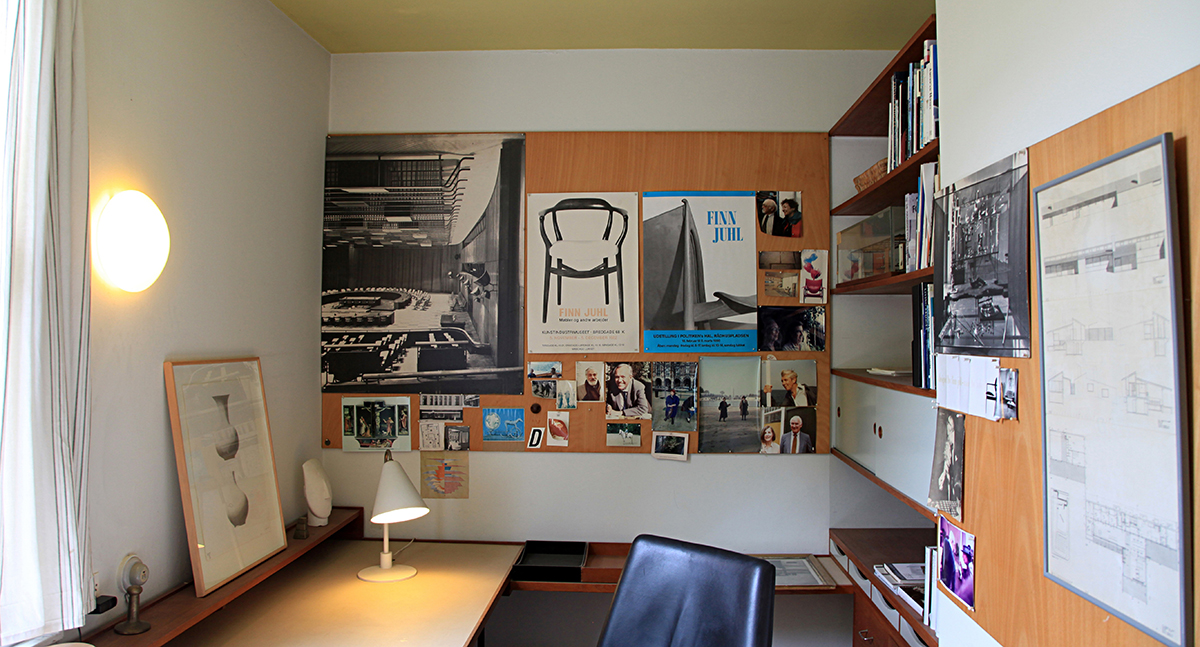 The Ordrupgaard is a renowned museum located in Chartottenlund, a municipality few kilometres north of Copenhagen, mostly dedicated to modern art and French Impressionism. The museum, founded in 1918, is housed in an early 20th century villa and in a famous modern-style building, opened in 2005, designed by acclaimed Iraqi-British architect Zaha Hadid.