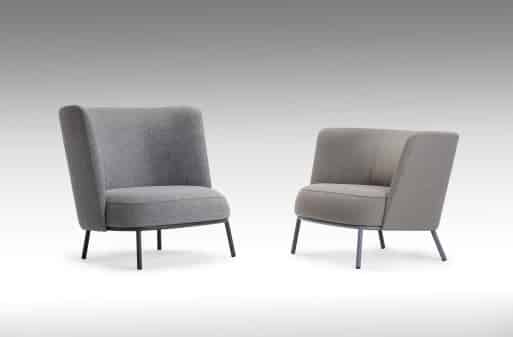 An armchair with several possibilities by Daniel Debiasi & F.Sandri for Offecct.The design team Daniel Debiasi & Federico Sandri divide their time between their studios in Verona and Bolzano. From 2018, they also belong to Offecct’s circle of new designers who add new thoughts to the furniture of the future. Their first project for Offecct is an exceptionally flexible armchair named Shift.

– The name Shift was a given, says Daniel Debiasi. The originality of the armchair is not only its ability to completely change the atmosphere of a lobby or lounge by simple means in the form of a seat and three different backs. But it also offers the possibility to easily change the upholstery and renew the armchair. As people work more in public places, the need for easy upgrades increases.

Through the different heights of the backs, Shift allows everyone to both focus completely on their work and to rest completely, beyond all duties.

– Shift demonstrates our tapping into the market needs in the public venues of the future and enabling the architect to create sustainable solutions – including quality and original design, says Offecct’s Design Manager Anders Englund.

Daniel Debiasi and Federico Sandri founded their own design studio in 2010.

Based in Italy, in Bolzano and Verona they work within various fields of design, ranging from objects to spaces. Their collaboration evolves along a continuous dialogue encouraged by spatial, cultural and behavioural observations. Multiple experiments with different materials and processes and the relationship between manufacture and craftsmanship form the basis for a much broader thinking, where objects are always considered as part of a bigger picture. Many of their projects have received international design awards.